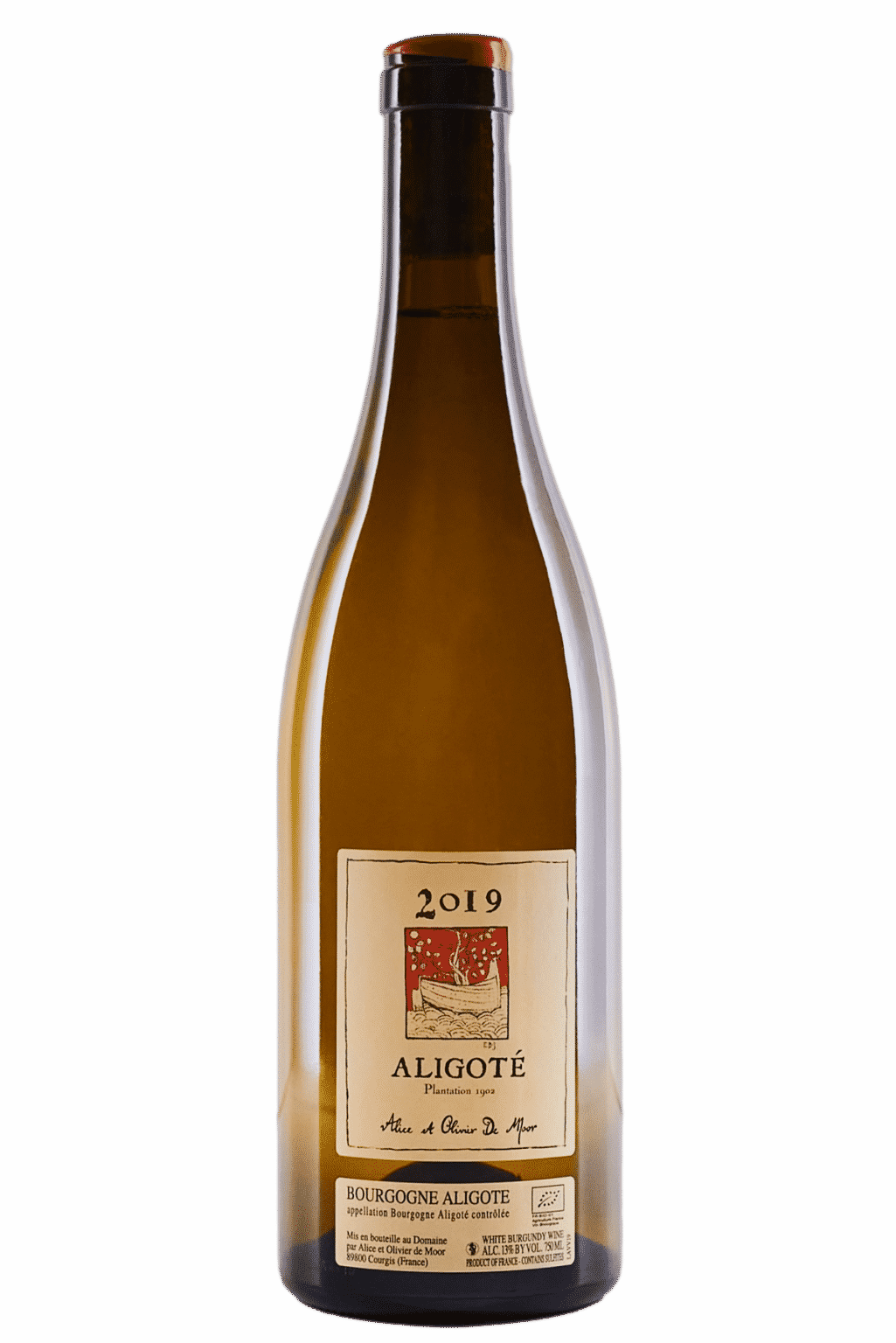 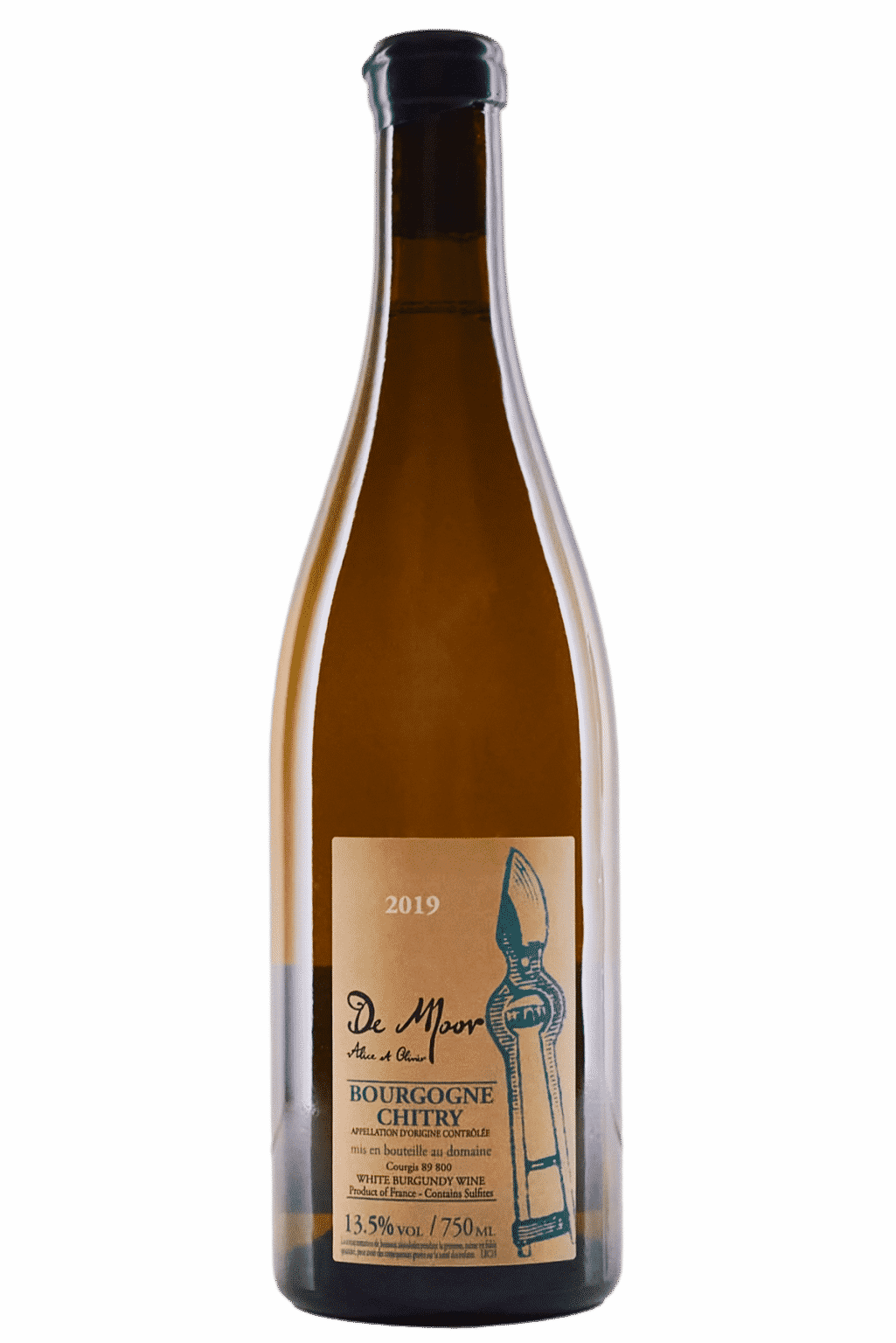 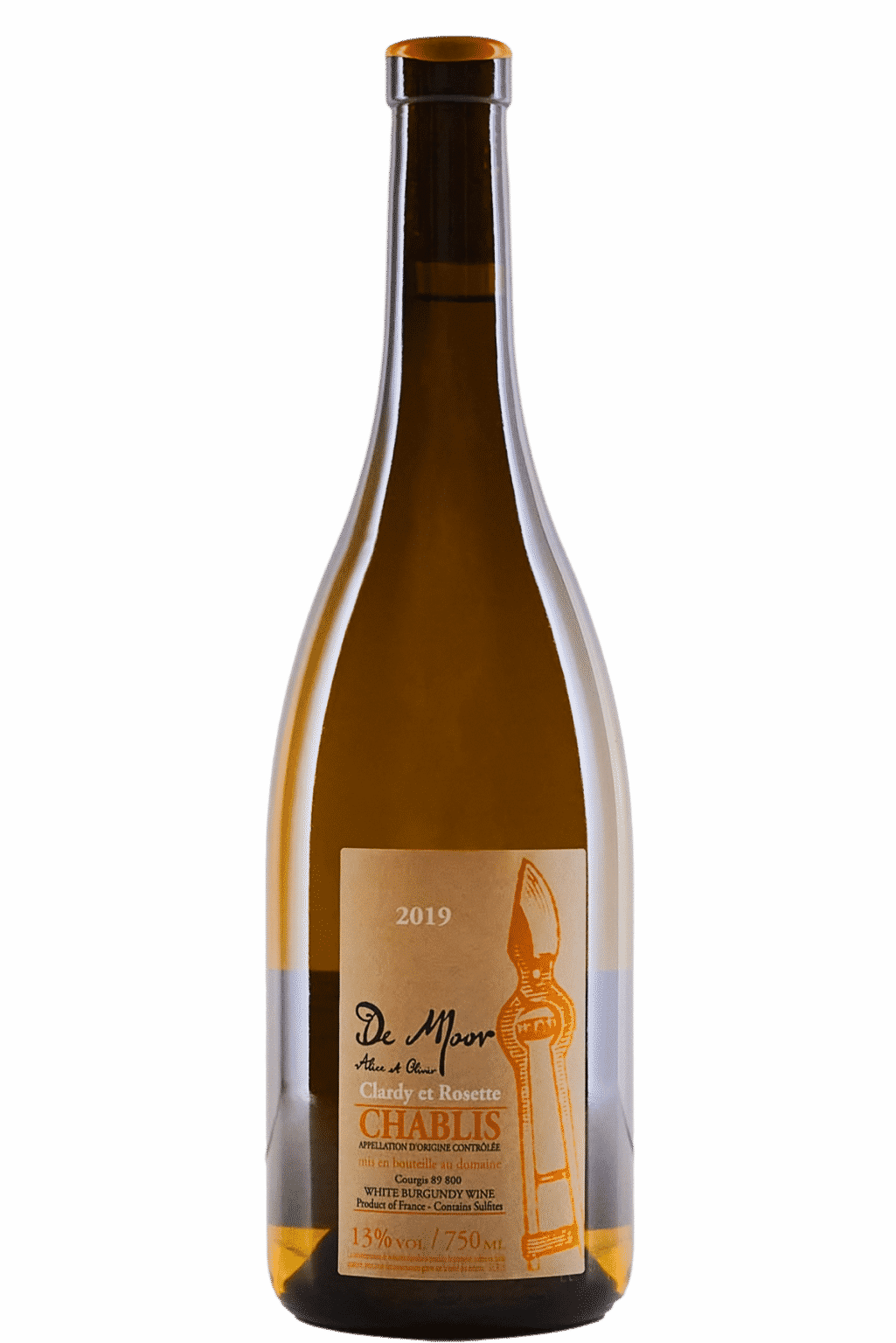 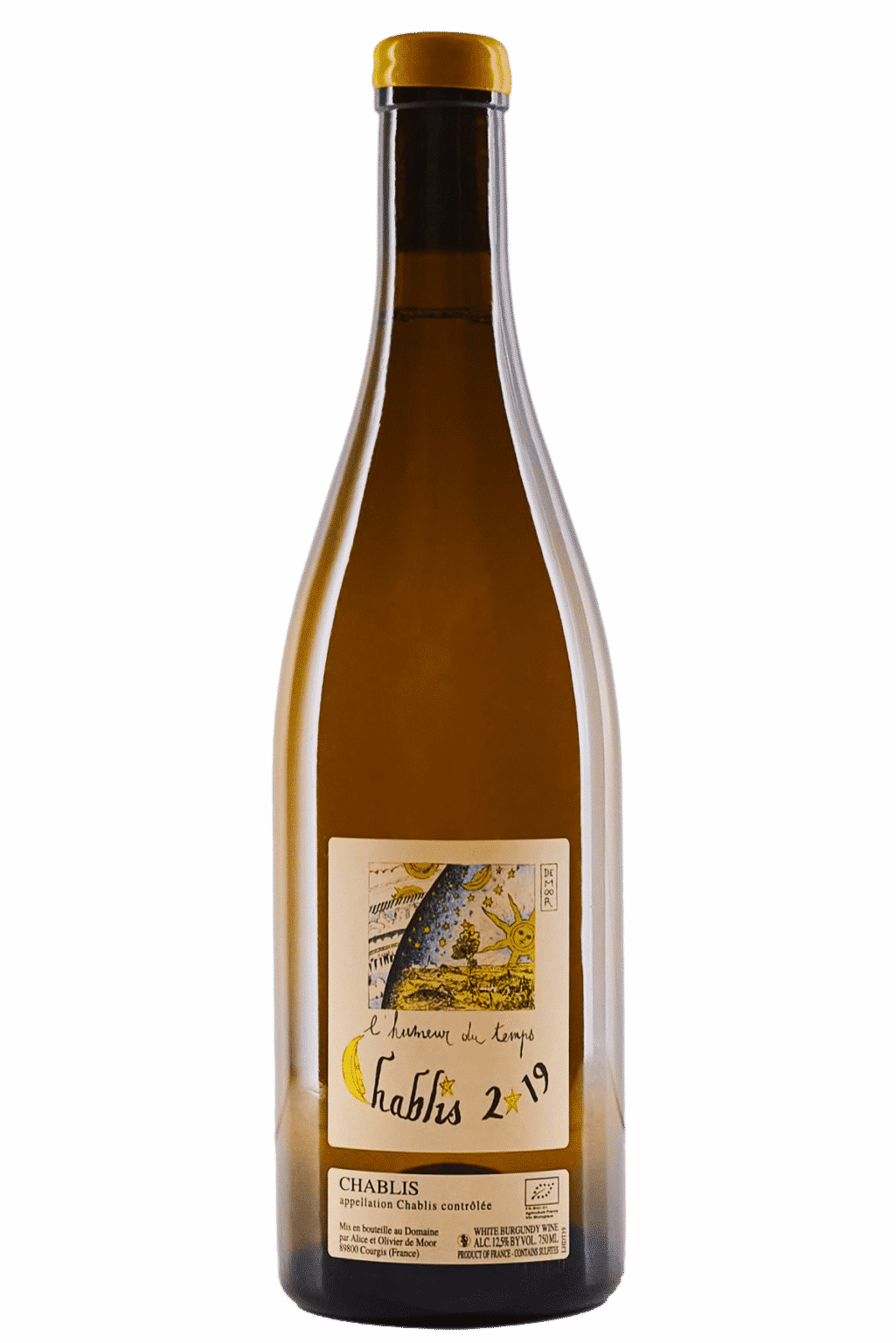 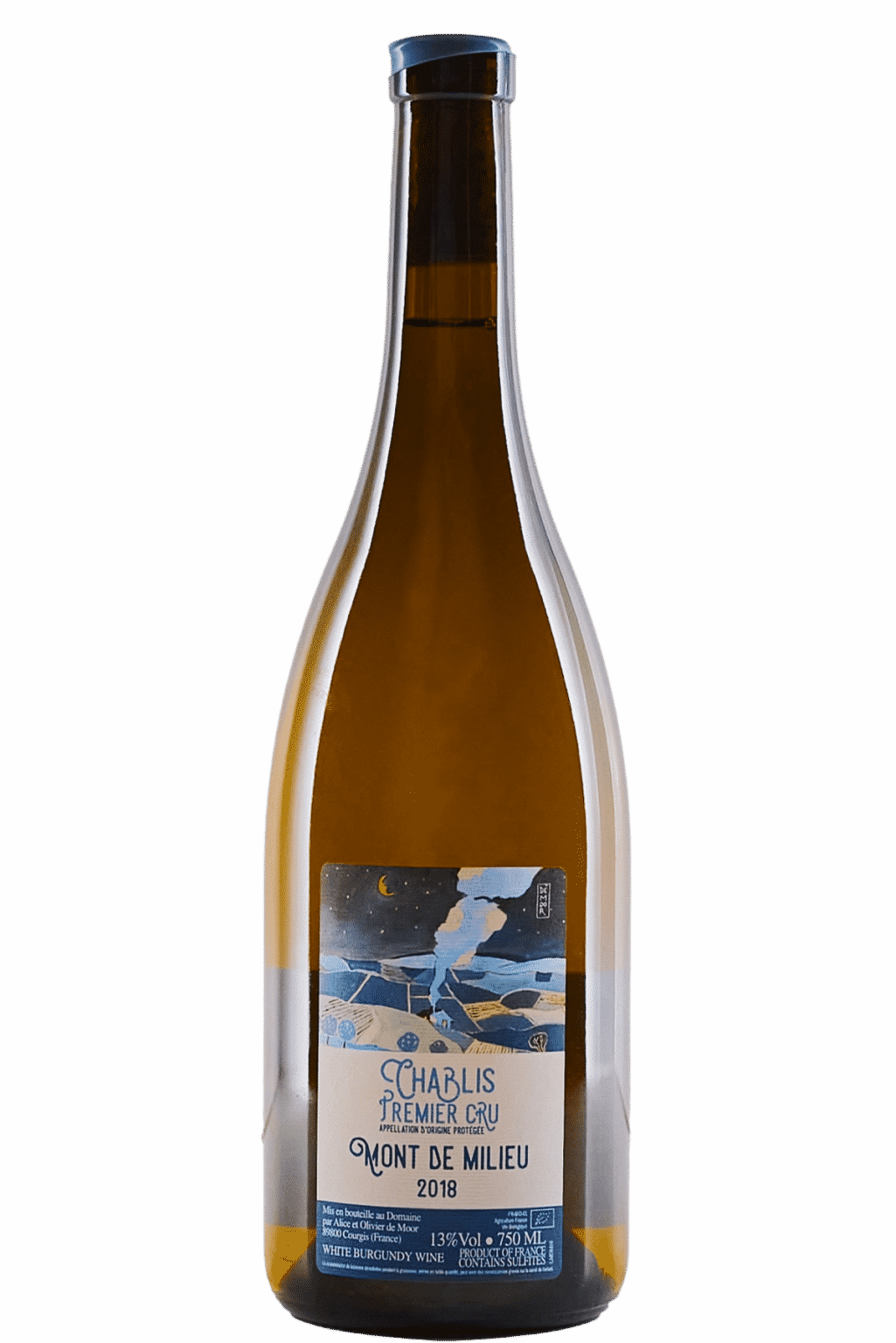 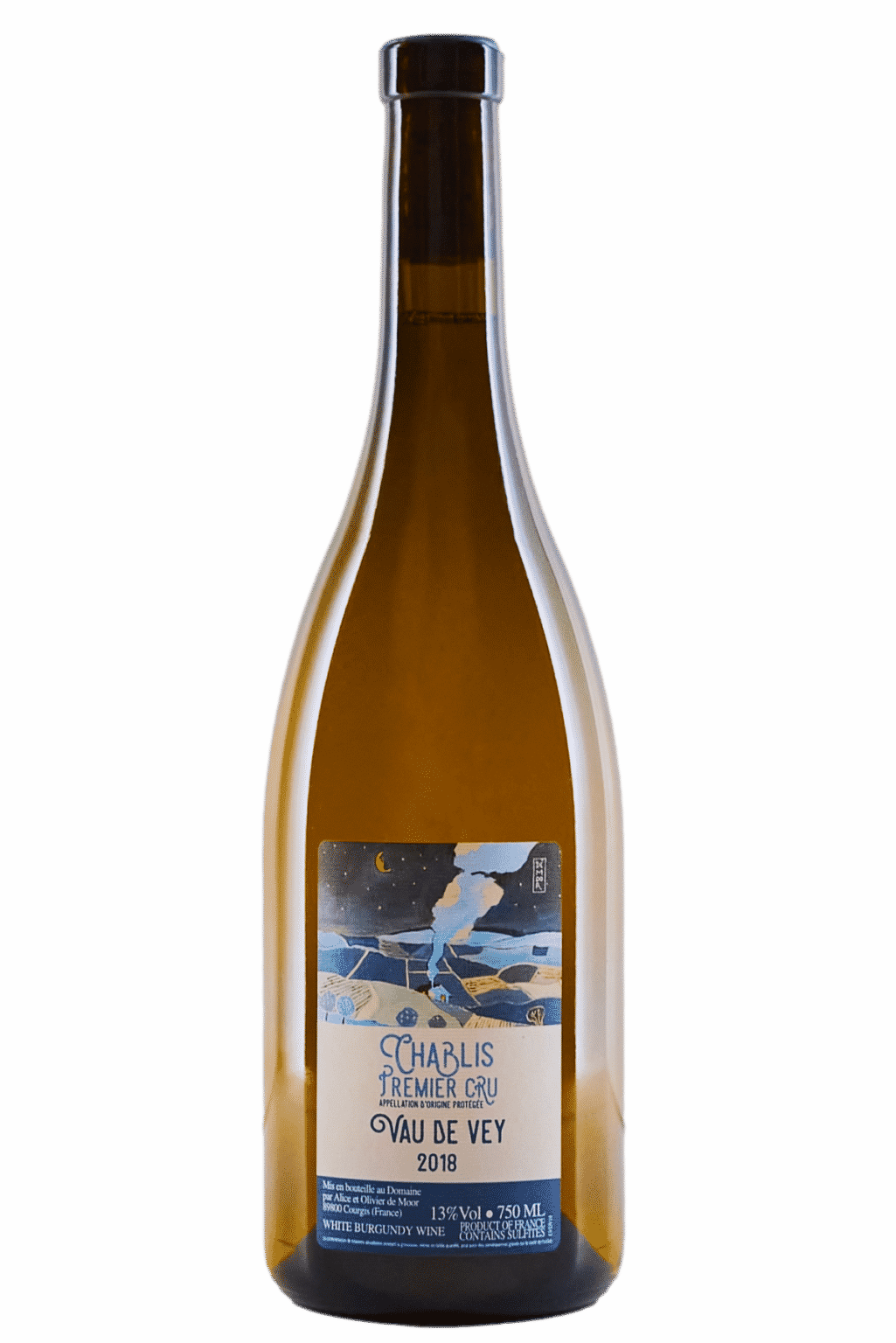 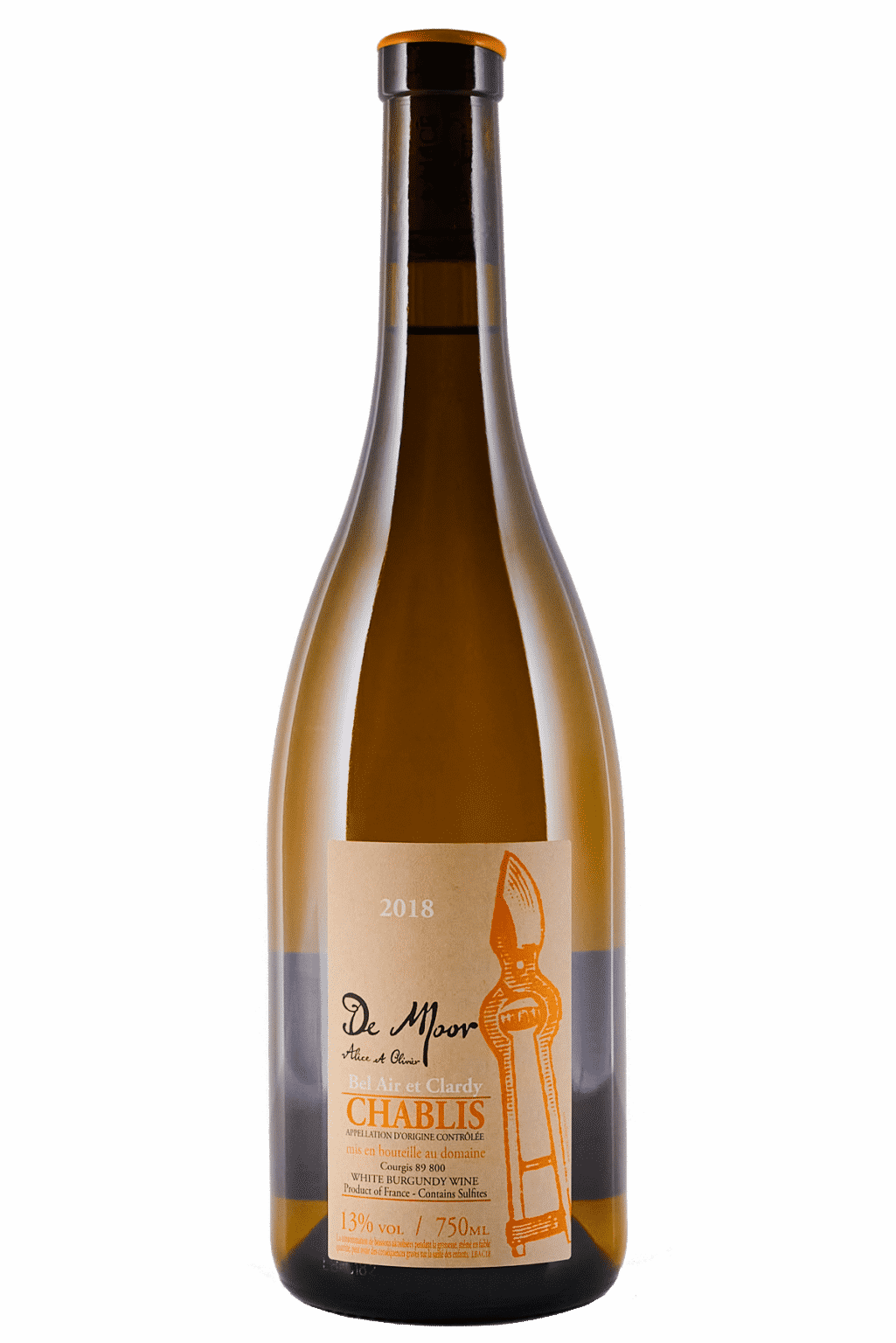 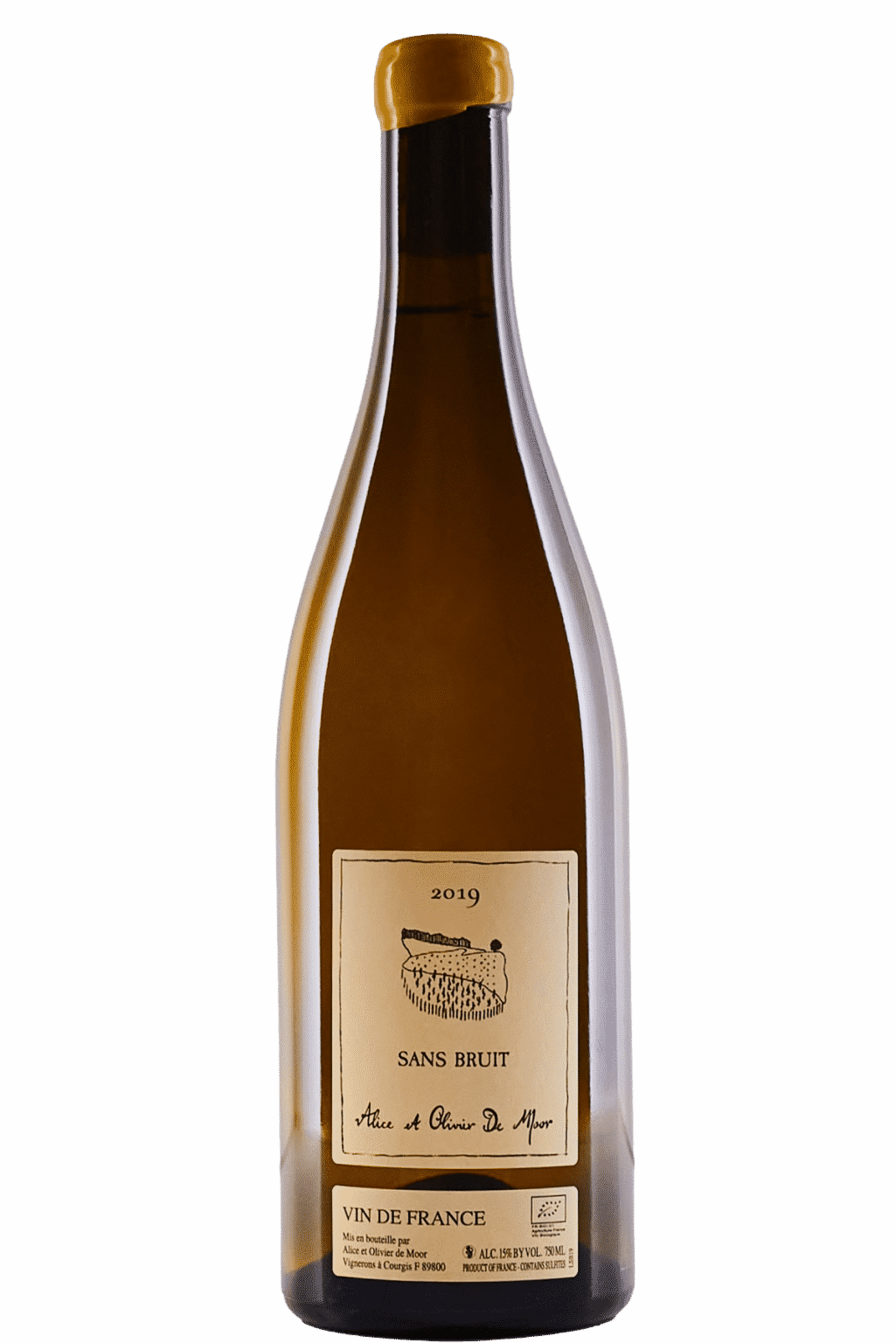 Courgis is a small town 7 km southwest of Chablis, where Alice and Olivier de Moor live and work. It's where Olivier grew up, and his “old” winery, the part where his Chablis ages in oak barrels, is under his grandparents' house. From the hill where Courgis is located, the view is across vineyards over hills to the Chablis Grands Crus. Olivier says that the landscape has changed a lot in his life, that all the forests, shrubs, and fallows that dotted the hills have disappeared in favor of the vines.

Alice is from the Jura, and the two met on a large estate in Chablis where Olivier was in charge of the vineyards. They are both winemakers, graduates of the Dijon school of oenology, with enough knowledge to take a radically different direction for their vineyards and wines than their neighbors. They started their farm by planting three Chablis plots - Bel Air, Clardy and Rosette - in 1989. From their first harvest, in 1994, they kept only 15HL. They were still employed elsewhere, but they gave up that drop after leasing their Saint-Bris vineyards: 0.55HA from Aligoté planted in 1902 and 0.40HA from Sauvignon blanc from 1945. For the next three years, they worked their 4HA of vines while tending vines. from other winemakers to earn a living. In 1996, they planted a large plot in Chitry (called Champagne) with Aligoté and Chardonnay.

The entire Chablis area is highly calcareous, with soils formed millions of years ago in a warm, shallow sea. The limestone here is rich in shellfish fossils, including oysters (exogyra virgula), urchins, bivalves, and ammonites. Bel Air and Clardy have a shallow shallow top layer over layers of harder limestone with fossils, a mixture of clay and limestone that drains a lot, even more so in Clardy which has whiter clay. Rosette has a more complex soil and is much more difficult to work with. The parcel slopes up to 40%, and the vineyard can be roughly separated into three distinct parts: the top is weathered materials on Portland hard rock; the middle slope is directly over the Kimmeridgian marl, which can quickly suffer from drought. Finally, the lower part is rich in dense clay with some limestone, resulting in later maturation. They usually do two harvests there, sometimes two weeks apart. They consider your best argument.

The terroir of St-Bris are eroded stones on the rock of Portland. The clay is brown, the soil drains. The Sauvignon blanc plot is exposed to the northwest, allowing it to mature slowly and achieve optimal aromatic expression. Originally this vineyard was missing the 30% from its vines, and the replacements were planted for 8 years with the local selection of Sauvignon Gris cuttings from the Loire Valley. At Chitry, the clay is also brown, on Kimmeridgian marls, and some flint stones.

The De Moors have grown their vines organically since 2005, a rarity in their area. In 2002, they stopped using large harvest containers and replaced them with small boxes where the grapes are not crushed under their own weight. In 2007, they built a large, high-ceilinged cellar, allowing them to do all their cellar work by gravity. In 2008, they bought a second-hand pneumatic press to treat the grapes as gently as possible. SO2 is not used at harvest or during winemaking. Aging is done in Burgundy barrels of different ages for Chablis and Bourgogne Chitry. The young Aligoté vines are aged in cement and stainless steel tanks, the VV Aligoté in barrels. Sauvignon Blanc, which often takes more than a year to ferment, is aged in tanks.

There are two bottles of Chablis: Rosette and Bel Air & Clardy, the latest blend from the two estates. These have nothing "normal" under the maturity of Chablis, nor are they marked by the gunpowder aromas created by excess sulfur. Olivier believes that in another era, Chablis had a buttery and nutty character similar to any low-yielding Chardonnay with reasonable maturity. He follows the same reasoning for his Sauvignon de St-Bris, which is ripe and rich. The other cuvées are Bourgogne Aligoté VV, Aligoté regular, Bourgogne Chitry, and two first special cuvées that are made completely without sulfur, Chablis L'Humeur du Temps and Aligoté “A Ligoter”.